Checking out Electric Buses at the Leichhardt Depot

- July 10, 2019
Today members of the community and Officers from the Council's Strategic Planning unit joined me on a visit to the Leichhardt Bus Depot to check out the Electric Buses and learn more about the trial.
It was fascinating to learn what goes on in a bus depot - to keep buses on our streets.

The project manager for the electric bus trial explained the differences between the Gas Powered Engines and the new electric buses requiring training of maintenance crew and drivers. The RMS (now Transport) also inspects the buses, on site, for Road Worthiness.

Malaysian company the Gemilang-bodied, BYD electric chassis buses are being built in Ballarat. One of these electric buses is also being trialled in Canberra.

The electric bus trial started on 1 July 2019 and was part of the Transit Systems contract with the state government, when they took over the Depot and associated Bus Services.
Gas and Diesel Buses are currently run out of the Leichhardt Depot which employs about 400 staff. 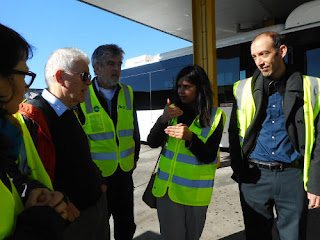 The visit was timely as the Council has our draft transport strategy on exhibition until 28 July 2019.

Transit systems was also keen to participate in the Footprints ecoFestival
Sunday 25 August 2019 – 11am-3pm
Whites Creek Valley Park, corner Piper and Smith Streets, Annandalewhich happens to be on the 470 and 433 bus routes on which the electric buses are currently being trialled. Electric Vehicles will be a feature of the 2019 Festival.
Climate Emergency Clr Marghanita da Cruz Community Inner West Leichhardt LEP Public Transport