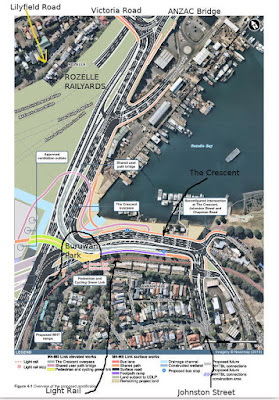 Increased in traffic, air pollution, noise and loss of mural.

Also despite headline,  issues with Cycling Routes into the city.

"The Environmental Impact Statement (EIS) and the Submissions and Preferred Infrastructure Report (SPIR) described and assessed important road network and active transport links at Lilyfield and Rozelle. Specific to the proposed modification those works involved surface works at Rozelle including the realignment and widening of key roads and intersections at and around the junction of The Crescent and City West Link. Further, works involved new and upgraded pedestrian and cyclist infrastructure including new north south connections between the new open space at the Rozelle Rail Yards, Rozelle
Bay light rail stop and Bicentennial Park."

• Realignment of the Pedestrian and Cycling Green Link (‘green link’) to the west of The Crescent, providing a connection between the Rozelle Rail Yards and the Rozelle Bay light rail stop 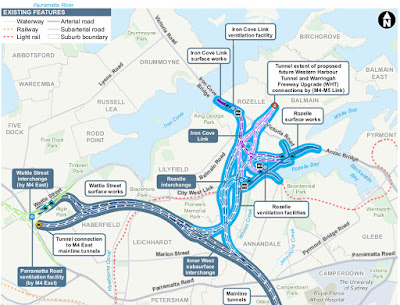 • Minor changes to the layout of the approach roads leading to the Anzac Bridge from Victoria Road, The Crescent and the Rozelle Interchange to improve traffic merging arrangements

"The Modification report will be exhibited for 28 days from 21 August to 18 September 2019. The community and other stakeholders will be able to provide feedback on the proposed modification to the NSW Department of Planning, Industry and Environment (DPIE) as submissions.

Following exhibition of the Modification report, Roads and Maritime will review the submissions received and respond to the issues raised in a Response to Submissions Report for the proposed modification.

This report will be provided to DPIE and will be assessed prior to a determination being made. If during exhibition or during the response to submissions process further changes to the proposed modification are identified, these changes would also be described and assessed."

"A traffic assessment was undertaken for potential construction and operational traffic impacts arising from the proposed modification.

Traffic and transport related construction impacts are expected to be minor with relevant levels of service comparable to that presented for the approved project. The relevant management measures identified in the SPIR and in the conditions of approval for the project would appropriately manage impacts associated with the proposed modification.

Operational impacts of the proposed modification were modelled to assess the traffic impacts of the modification in comparison to the approved project. Two future years (2023 and 2033) were assessed in both ‘with project’ and ‘cumulative’ scenarios using WRTM v2.3 to ensure consistency with the EIS traffic assessment."


"The key operational impacts resulting from the proposed modification are:

• With the inclusion of the proposed modification, there is minimal change in the daily traffic forecast on the Sydney metropolitan road network. Some increase in vehicle numbers is forecast on Anzac Bridge eastbound and on Johnston Street northbound. A sensitivity test was undertaken which identified that this predicted traffic increase would have a minimal impact

• Travel times from City West Link to Anzac Bridge are forecast to improve as a result of the proposed modification however, an increase in traffic would enter the network and has the likely potential to impact parts of the network already forecast to be congested such as Victoria Road northbound in the AM peak

• Right turn movements from The Crescent overpass into James Craig Road (eastbound) and from Johnston Street into The Crescent (southbound) are not permitted as a result of the proposed modification. However, in both cases the number of traffic movements impacted are limited and alternative traffic routes are available

Construction noise impacts were assessed for three key construction processes: construction of The Crescent overpass, the green link and the shared user path bridge; use of the approved construction ancillary facility (C6a); and The Crescent, Chapman Road and Johnston Street intersection works. "


"Key construction noise impacts from the proposed modification are:

• The construction of the proposed modification would be generally in similar locations to what was assessed for the approved project, meaning the impacts during construction are generally expected to be consistent with the EIS. The works around The Crescent, Chapman Road and Johnston Street may however impact a relatively small number of additional receivers given the need to complete construction work for the proposed modification further to the south and east than was assessed for the approved project. As a result, it is proposed to change the receivers proposed for noise mitigation to address impacts from out of hours construction (as detailed in Condition E87 and Appendix D)

• A number of buildings in the vicinity of proposed construction works have been identified as being located within minimum working distance for cosmetic damage and human comfort and these potential impacts would be managed in accordance with the relevant existing Conditions relating to construction vibration: E81, E83, E84 and E85."


"In relation to operational noise impacts, the following key impacts are anticipated:

• Operational road traffic noise levels are expected to generally be comparable to the approved project, with noise levels for the proposed modification being within -0.5 dBA to +0.5 dBA of the EIS noise levels for the majority of receivers in the study area. This relatively small increase is however sufficient to result in additional exceedances of Noise Management Levels on Johnston Street in both the Do Something and Do Something Plus scenarios

"A noise barrier also has the potential to result in undesirable visual, urban design and wind loading impacts

• At property treatments for the eligible receivers are considered to be the preferred noisemitigation measure."

"The proposed modification does not significantly alter the scope and nature of construction works proposed in the vicinity of City West Link, The Crescent and Johnston Street as outlined in the EIS. As a result, the comprehensive mitigation measures identified in the SPIR and conditions of the project approval such as implementation of the Air Quality sub-plan to the Construction Environmental Management Plan (Condition C4(d) and the Dust Deposition Monitoring Program (Condition C9), are considered appropriate to manage construction impacts associated with the proposed modification."

"The operational air quality assessment shows that some receptors are predicted to experience increases in emissions by comparison to the EIS. However, the predicted increases are small and donot the change the outcomes of the assessment presented for the approved project. As a result no additional mitigation is considered necessary."

Changes to a number of the Conditions of Approval have been proposed to accommodate the proposed modification. The proposed amendments to Conditions E120, E121 and E134 reflect the proposed realignment of the green link and shared user path bridge."

"The proposed amendment to Condition E163 requires archival recording of The Crescent Mural at Annandale.

The proposed amendment to Appendix D (associated with Condition E87) reflects a change to the receivers proposed for noise mitigation to address impacts from out of hours construction work in the vicinity of the Johnston Street/The Crescent/Chapman Road intersection.

All other conditions of approval would continue to apply to the project."