A Climate Emergency in the Inner West 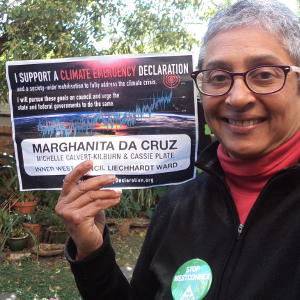 Last night the Inner West Council voted Unanimously to declare a Climate Emergency and reflect this in KPIs for the CEO and the Budget.


In introducing the motion, I asked my fellow councillors to  support the motion before them to:
I thanked Mr Pierce from the ExtinctionRebellion NSW for asking me to bring this motion to council and coming to speak. I also acknowledged Mr Chase from Climate Change Balmain-Rozelle and Ms Reffell from Stop Adani (who came to speak representing local groups) for their persistent advocacy and activism on this issue.

Listen to the speakers at https://youtu.be/P_os_AyjYas?t=934

And then I continued...

My motion is based on one passed by Randwick Council last month. But I would also like to acknowlege the input from the CEO to include points 2 and 3 in the motion.
Haberfield Resident and former Ashfield Mayor Vince Sicari sent a message of support, commending Council on taking a stand before it is too late for the Barrier Reef, Our food bowl, the Murray-Darling basin and the Island Nations of the Pacific. He points out that parts of our country are already experiencing unprecedented droughts and that our very existence is at stake.
By declaring an emergency, we will not be alone, we will be joining 17 other councils in Australia and 520 world wide, as well as Scotland, Wales, the UK and Ireland.
In declaring an emergency we commit to do more than business-as-usual and reform-as-usual. We willl need temporary protection and adaptation measures while prevention and restorative measures are put in place and achieve their full effect.
Taking the lead on Climate Change is not new to our Community.
In June 1994, Leichhardt Counciladopted an Energy Efficiency DCP for all new houses and majorrenovations. This was a world first and the forerunner of BASIX.
In 2005, I helped steer a successfulProject, sponsored by Leichhardt Council and funded by the HowardGovernment, which replaced incandescent light bulbs in local homes with more energy efficient longer lasting Fluroescent bulbs.
Since then Council and our community have installed Solar Panels and LED lighting. We have just about divested from fossil fuels. However, we are yet to tackle transport seriously, or focus on the employment and business opportunities of a low carbon economy.
Inaction will have terrible environmental and economic consequences we must declare a climate emergency now.

An amendment was moved to include the items of actions from an October 2017 Resolution of Council on Renewables in the CEO's KPIs.

The next task is to establish the KPIs

Last year, the NSW Government released the state of the Environment reporting on 2016 data showing a decrease in emissions. The Federal Department of Energy and Resources has provided more timely data as it is required to under its International Obligations.

These emissions are created on our local roads, on the arterial roads which pass through our LGA, the aircraft which fly overhead and from the ships in Whitebay.

Meanwhile the use of public transport is highest in Sydney. Our residents walk for recreation and transport. Our pre-motor vehicle suburbs have enjoyed spectacular growth as the social benefits of these suburbs are recognised.