"Betty Mason (nee Cochrane) made a sustained contribution to retaining and improving the quality of the urban landscape in the Municipality, particularly, but not limited to, Annandale. She remained effective in this area for an extraordinary period of over 40 years.  A modest recognition of her extraordinary role will be entirely appropriate, and I urge support for the motion.

In saying more to this I’d like to emphasise how much Betty Mason loved this part of Sydney, and how durable and effective her work in the Inner West has been. I cannot think of anyone who had her particular blend of enjoyment of the built environment and the character of Annandale, Glebe, Leichhardt and the other localities here on the one hand, and commitment to appropriate actions to maintain and ensure its character and quality for the future.

I lived and worked in the Inner West when younger and saw up close that she had a day to day commitment. She was particularly effective in preventing the district from being cut up by overhead freeway construction in the 1970s, and in seeing balance and good sense prevail in limiting the potential harm of unrestrained development, and balancing and improving land use for recreational purposes.

What’s more, she did this in her characteristically pleasant, quiet but persistent way. She had no interest in fame or stature and her consistent and uncomplicated tenacity over decades has left a legacy for present and future generations.

It would be good to see that legacy acknowledged. I should mention that her close family is willing to offer a financial contribution to an agreed Historical Marker.

Thank you for your consideration."

Quote from Movers and Shakers of the Leichhardt Municipality

In 2004, Betty was identified as a Mover and Shaker in the Leichhardt Municipality - and the publication by that name included an interview with Betty Mason, Community activist and environmental campaigner:

"In the 1970s I  became interested in the local community. An application went before Council to demolish two historic houses in Johnston Street, Annandale: Oybin and Roselle to be replaced by 8 story buildings. Other societies and associations were being formed in Sydney and we formed the Annandale Association to save these historic homes. The media became aware that we were cleaning up Oybin as it was in disrepair. The story was covered and Oybin was saved. Roselle was demolished but the height of the new building was lowered. The Association went on to save many houses in the Annandale area.

My interest now is in the environment and my philosophy is that we are all part of the world. Everything is connected; a tree, a person, an insect,. I don' think, as human beings, we have the right to destroy a forest. Everything should be respected. Mankind can use these precious resources with respect and care, not wastefully.

I work now as a volunteer for the Total Environment Centre. This was the first centre of its kind in Australia. Campaigning for the more sensible use of resources such as water, electricity and forests"- Interview: Davidia Peters. 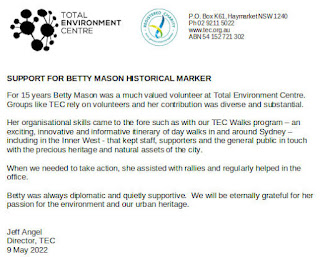 For 15 years Betty Mason was a much valued volunteer at Total Environment Centre. Groups like TEC rely on volunteers and her contribution was diverse and substantial.

Her organisational skills came to the fore such as with our TEC Walks program – an exciting, innovative and informative itinerary of day walks in and around Sydney – including in the Inner West - that kept staff, supporters and the general public in touch with the precious heritage and natural assets of the city.

When we needed to take action, she assisted with rallies and regularly helped in the office.

Betty was always diplomatic and quietly supportive. We will be eternally grateful for her passion for the environment and our urban heritage.

Betty Mason campaigned effectively to save much of the heritage of Annandale in the Leichhardt Municipality as well as improving the area with tree planting and parks.

Betty Mason co-founded the Annandale Association in 1969 when the “witches” houses were threatened with demolition, and worked with the National Trust to protect historic buildings in the area. The Association also defended Annandale from the expressways, which were planned to run through the suburb.

A resident action group was formed with Betty as secretary,  Jeffrey Miles, a Sydney barrister who would later become Chief Justice of the ACT, anthropologist Nick Peterson and his wife Ros,  and history student Alan Roberts. Objectives for the new Annandale Association were thrashed out at the Masons’ home.

Alan Roberts later chose the creation of Annandale as a suburb for his history thesis. Betty assisted with the thesis by examining the certificates of title for every one of the many hundreds (perhaps thousands) of lots and then typed up the thesis.

A patchwork quilt was presented to Betty in recognition of her contribution to the community. Making the quilt was a secret project. Maureen, the “ring leader”, organised her husband to photograph a number of Annandale landmarks. The photographs were dropped in letterboxes across Annandale. Each of the women who received a photograph created a picture patch which Maureen collected and sewed to a green backing fabric. Betty described the quilt as “the creation of a number of local women”. 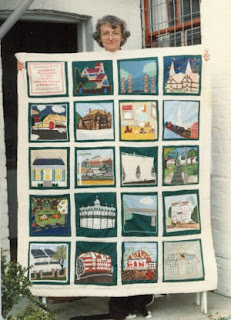 1.   Annandale Association 10th Anniversary for Betty from her friends in Annandale ;

3.   Annandale House Gates, in the Grounds of Annandale Public School;

16. Two of a Group of three Terraces Johnston Street, near intersection with Reserve St;

17. Josie, the Poet's House - a villa with stables in the backyard, where her husband Freddy kept trotters; and

18. A Corner Shop in Annandale

In 2010 Betty donated the quilt to the Local History Section of the Leichhardt (now Inner West) Library.

“Historical Marker - Commissioned to enhance understanding of the unique history and identity of people and events associated with the location. May include steel fabrication, engraved or pressed metal, based on 20 year + tenure.” - Inner West Memorial planting and plaques in parks and open spaces policy, viewed 25 April 2022, https://www.innerwest.nsw.gov.au/ArticleDocuments/954/Memorial%20planting%20and%20plaques%20in%20parks%20and%20open%20space%20policy.pdf.aspx

No further comments were required for this Notice of Motion.