A number of residents have contacted me concerned about pedestrian safety on Croydon Road. Croydon Road, Croydon is a busy road particularly before and after school. This makes it difficult and dangerous for children and other pedestrians who are walking to school, the railway station and bus stops.

There is currently a roundabout at Anthony Street – however, the design of the traffic islands at the roundabout with curved narrow slippery surface increases the danger to pedestrians.

There are narrow speed humps which have caused car accidents rather than safely calming motor vehicles.

A number of residents have contacted me regarding the danger of the pedestrian crossings on Frederick Street Ashfield, particularly the one at the intersection with John Street. This has been the site of numerous accidents and near misses when cars try to overtake other cars waiting to turn right into Frederick or John Streets.

There are a number of parks, the swimming pool, train station and school on the western side of Frederick Street. To access these, residents including children and the elderly need to negotiate Frederick Street. 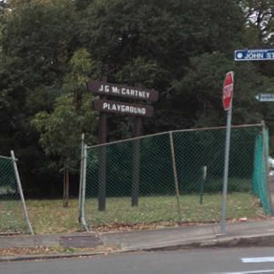 at JM McCarthey Playground at intersection

of John and Frederick Sts Ashfield

Subject:         Notice of Motion: Pedestrian Safety in Haberfield and Leichhardt

Ramsay, Marion and Norton Street are busy motor vehicle thoroughfares and bus corridors, with commercial precincts used by less mobile elderly residents and children with and without carers.

Local residents and businesses have raised the following specific concerns:

b) Buses travelling north along Norton Street, clipping the footpath endangering pedestrians, including children heading for Leichhardt Public School, as they turn west from Norton Street

d) Cars travelling along Marion Street screeching to a halt at Flood Street. There have also been animal fatalities at the intersection