The Inner West votes to Deamalgamate

On December 4, the Inner West Council put a Poll question to the electorate alongside the election of new councillors. Though the vote is not binding on council the result was a clear message.

Results are available at https://vtr.elections.nsw.gov.au/LG2101/inner-west/results

A cost benefit analysis was prepared and a yes and no case were distributed to every voter and translated into various languages.

At the election, Inner West citizens will also be asked:

“In May 2016, Ashfield, Leichhardt and Marrickville councils were amalgamated into one local government area by the State Government.

On 8 June 2021, Council resolved to conduct the poll. The new elected Council will receive the results and determine how to proceed.

Inner West Council commissioned Morrison Low to undertake a high-level cost benefit assessment case, to identify the benefits and costs of a potential de-amalgamation of the Inner West Council into its former councils of Ashfield Council, Leichhardt Council and Marrickville Council. 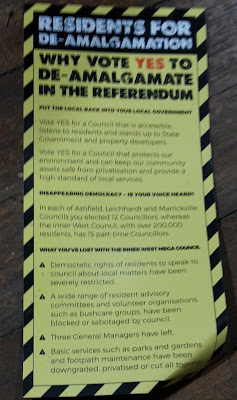 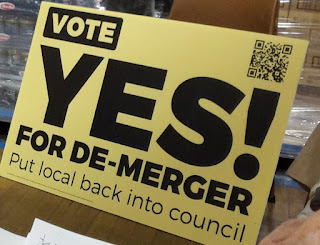