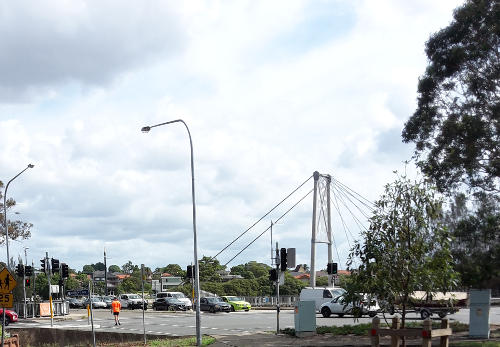 SUMMARY
Detailed design plans have been prepared for a contra-flow bicycle facility between Dobroyd Parade and Hawthorne Parade, Haberfield. Consultation with affected residents and owners was undertaken on the draft detailed design plans in February and March 2020. It is recommended that the detail design plans are approved for construction.

BACKGROUND
In August 2018 Council adopted the Cooks to Cove Greenway Master Plan. Based on the adopted Master Plan concept designs were developed and endorsed by Council in May 2019. Council is now developing detailed design plans to facilitate construction.
As part of the works it is proposed to upgrade the Bay Run east of UTS rowers to Lilyfield Road, including the Lilyfield Road bridge. To facilitate upgrade and widening of the shared path through this section the seawall will be required to be widened into Iron Cove.
Whilst pedestrian and cyclist access will be maintained as much as possible, for periods of the construction it will be necessary to divert all pedestrians and cyclists. This would include, at a minimum; during construction of parts of the seawall, construction of a widened ramp up to Lilyfield Road Bridge and construction of a ramped connection to the Greenway.
There is no room for pedestrians and cyclists to travel adjacent to the proposed works area due to the proximity of the City West Link. As such a diversion route is required.
Proposed pedestrian and cyclist diversion plan.
Refer Attachment 1 for an overview of the proposed diversion routes.
During the works it is proposed that cyclists and pedestrians would be diverted from the Bay Run at Timbrell Drive across the City West Link and up Mortley Avenue.
Access to the UTS rowers would be retained from the café and along the existing path west of the club and from the carpark.
From Timbrell Drive, pedestrians would be diverted through Robson Park, along part existing and part new path, and then along an existing path through the park lands adjacent to the City West Link. From here pedestrians would travel along Dobroyd Parade, Hawthorne Parade, and Canal Road to re-join the Bay Run at Maliyawul Street. The total length of the diversion would be 1.6km. This compares to the regular route of 1.0km.
The path through Robson park is only 2.1m wide and would not be suitable for the high numbers of cyclists using the Bay Run. Instead cyclists would be diverted on-road up Mortley Avenue, down Boomerang Street and along Crescent Street. From here cyclists would travel along Dobroyd Parade, Hawthorne Parade, and Canal Road to re-join the Bay Run at Maliyawul Street.
The low traffic numbers are generally suitable for an on-road route although it is noted that less confident riders may ride through Robson Park and along the shared path following the same route as pedestrians.
Based on historic traffic counts, traffic numbers along the proposed diversion route are as follows:
·    Mortley Avenue: 5500 to 6000 AADT
·    Boomerang Street (north of Mortley Avenue): 1200 to 2000 AADT
·    Crescent Street: 500 to 600 AADT
·    Tillock Street: 500 to 600 AADT
·    Hawthorne Parade to Dobroyd Parade one-way link: 255 AADT
All roads except Mortley Avenue have low traffic volumes suitable for an on-road cycle route. Mortley Avenue forms part of an existing cycle route, but existing conditions are suboptimal due to the mixed traffic and high traffic volumes combined with a significant incline.
Further investigation and designs to facilitate the diversion route will be undertaken as part of the Bay Run upgrade detailed design. This is likely to entail investigation of:
·    Improvements to the intersection of City West Link, Timbrell Drive and Mortley Ave
·    Marked up-hill shoulder lane and mixed traffic down-hill lane on Mortley Ave
·    Extension of Robson Park path network and conversion of the path through Robson Park to a shared path
·    Crossing point at Boomerang Street
·    Conversion of the path link from Boomerang Street to Dobroyd Parade to a shared path
·    Conversion of the Dobroyd Parade to Hawthorne Parade one-way link to a contraflow
The conversion of the Dobroyd Parade to Hawthorne Parade one-way link to a contraflow bicycle facility is discussed in detail below.
Contraflow link between Dobroyd Parade into Hawthorne Parade
A small stretch of the diversion cycle route between Hawthorne Parade and Dobroyd Parade is one-way. The one-way link currently prohibits vehicles travelling east bound from Dobroyd Parade into Hawthorne Parade.
To enable the Bay Run diversion route to be viable for cyclists, the one-way link would need to be modified to allow cyclists to travel in both directions through this stretch.
In accordance with RMS Technical Direction td14-02 a contra-flow bicycle facility may take the form of a marked lane or as a movement designated by signs only. Both facilities require combinations of regulatory and supplementary signage. Pavement markings that raise awareness of bi-directional bicycle movements are also recommended.
The one-way road width is 4.2m wide at its narrowest point and widens at either end to over 6.0m.

A 1.4m wide marked contra-flow bike lane could be implemented along the length of the one-way section on the northern side; however, given the short distance (55m), very low traffic volumes (255 AADT), adequate sight distance (30m) and low speeds (35km/h 85%ile speed) it is considered movement designated by signs and pavement markings only is appropriate.
The proposed signage and pavement marking changes are shown in the detailed design plan in Attachment 2. This includes signage changes at either end of the contra flow facility as well as a bicycle pavement markings.
Associated with this is modification to existing parking signage and line marking in Hawthorne Parade just south of the proposed contra flow facility to enable cyclists to transition from on-road to the Greenway path safely, whilst also facilitating turn movements for vehicles. The proposed changes would result in the loss of three car parking spaces.
Modifications to the one-way link between Dobroyd and Haberfield Parade and parking in Hawthorne Parade are proposed to be implemented as part of the Richard Murden Reserve park upgrade. These works are anticipated to be undertaken in mid-2020.
It is intended that the changes are retained on a permanent basis to facilitate shut down of the Bay Run should it be required in future and provide a better connected bicycle network.

PUBLIC CONSULTATION
A notification letter and plan of the proposed works was delivered to residents of properties within 100m of the one-way link on Dobroyd and Hawthorne Parades on 17 Feb 2020. A total of 16 letters were distributed. Inner West Bike Coalition was also contacted for comment.

One response was received from Inner West Bike Coalition in support of the proposed works.