Air Quality and Carbon Emissions in the Inner West

Not surprised the liberal councillor did not support my Notice of Motion but disappointed that Labor didn't either even after I accepted pted their incoroporated their foreshadoew motion (to establish a fund) as an amendment.

Thankyou to Ms Harvey for coming to speak to council with her baby.

The air pollution in the Inner West is excacerbated by the Bush Fires but the fumes from Diesel Trucks and buses, Cruise and Concrete Ships is also a significant source of pollutants. 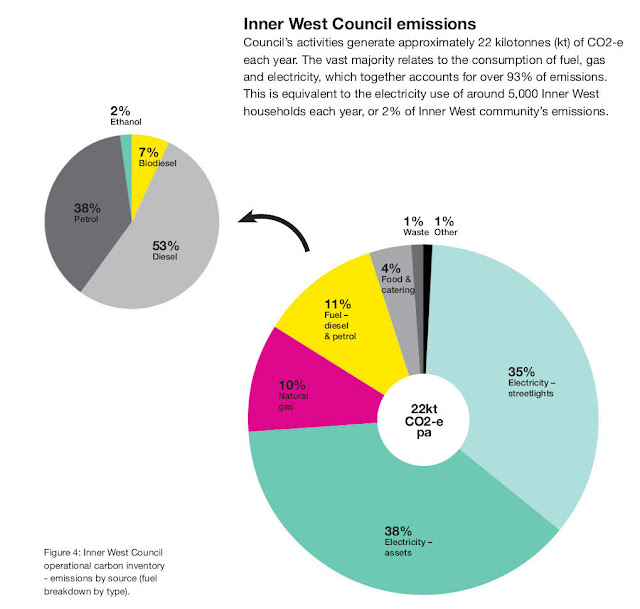 
1. Recognises that the catostrophic fire conditions, and the bushfires, are a result of Climate Change caused be greenhouse gas emissions from the burning of coal, oil and gas;


2. Notes that the smoke from bushfires and the burning of coal, oil and gas reduces the air quality in the Inner West affecting the health of our residents and does what we can to reduce emissions from our operations by rapidly improving our Energy Efficiency and transioning to Electric Fleet.


3. Writes to the Prime Minister Scott Morrison and the Leader of the Opposition Anthony Albanese calling on them to:

a) Rapidly phase out the burning of coal, oil and gas which is generating the greenhouse gases;


b) Prepare Australian communities, health and emergency services for escalating fire danger; and


4. Writes to the Premier and Leader of the Opposition in NSW calling for a halt to the ongoing budget cuts to the National Parks and Wildlife Service which have severely limited its ability to carry out hazard reduction and fight wildfires


Statement from Australian Mayors: Climate Change has grave costs for our community that can no longer be ignored

The fires this week in Australia have placed hundreds of thousands of people in great danger. The catastrophic conditions for these fires were, at least in part, fuelled by climate change.

In the past week, people have lost their lives, their loved ones, and their homes.

Many businesses have lost the ability to operate and trade.
Our air has been filled with smoke, making it hard to breathe and affecting thousands of people with respiratory issues.

Fire seasons are now starting earlier and lasting longer. Apart from the stress this takes on first responders and communities, it also results in a shrinking window to carry out hazard reduction burns.

Now, it is time to honestly and bravely address one of the major causes of these fires, climate change.

Now we need to significantly increase funding to frontline services.

Now we need to place the welfare and safety of citizens ahead of profit, and to support those companies offering real solutions

Some regional towns are already running out of water. How will they survive the next fire? Many in the insurance industry are saying that large areas of Australia will be uninsurable.

This government has the chance to be the first to turn the years of inaction and neglect into action and focus and allow our communities to reap the rewards
When we have a crisis, it makes sense for us to listen to emergency service professionals

Now, it makes sense for our federal government to listen to the warnings of those on the frontline.

The Kimberley Land Council’s Indigenous fire management program is extremely important to the biodiversity of the environmentally significant Kimberley region.


Highly skilled Indigenous rangers use traditional knowledge and techniques, together with modern science and technology, to fight fire with fire and reduce the likelihood of large uncontrolled wildfires.

Aboriginal people in the Kimberley have been undertaking traditional fire management for thousands of years. However, with the onset of colonisation and the removal of Aboriginal people from traditional lands, traditional burning was largely stopped during the twentieth century. This led to the emergence of large, uncontrolled wildfires, usually occurring late in the dry season and destroying important ecosystems and habitats. Often these late dry season wildfires impact grazing pasture, infrastructure and other assets.


In the last 25 years, with the introduction of native title and the recognition that western fire prevention methods have not been working effectively, we are now seeing a reinvigoration of traditional fire management in the Kimberley and all across northern Australia.


The fires burn slowly, reducing fuel loads and creating fire breaks. Not all the area is burnt, with the end result a mosaic of burnt and unburnt country. This creates a similar landscape to when Kimberley Aboriginal People walked the country and burnt as they went for hunting, ceremony and other cultural purposes.


The method removes fuel for larger fires late in the dry season when the weather is very hot, at the same time as maintaining and protecting habitat for mammals, reptiles, insects and birds.


There are other organisations and government departments such as Department of Parks and Wildlife, Department of Fire and Emergency Services, Australian Wildlife Conservancy and Pastoralists that manage fire in the Kimberley by carrying out early dry season prescribed burning.
Source: https://www.klc.org.au/indigenous-fire-management


Indigenous fire methods protect land before and after the Tathra bushfire

“On a hot, dry day in March 2018, 20 separate wildfires ignited across the Bega Valley in New South Wales.

One fire that began at Reedy Swamp north of the town of Bega tore through close to 1,000 hectares before reaching the beachside township of Tathra.

Six months on, a forest of bare, blackened trees frames the town, where more than 100 homes were destroyed or damaged.

But on a small patch of bushland on the south-western edge of Tathra, a patch of green shows where the fire came to a halt.

The land is part of 71 hectares owned by the Bega Local Aboriginal Land Council (LALC) at Tathra West.

The title to the land was transferred in 2016, 17 years after it was granted to the Bega LALC under the Aboriginal Land Rights Act process.

In 2017, the Bega LALC began a cultural burning program as part of the management strategy for their landholdings. “

The Bushfires in NSW have seen the tragic loss of human life, stock and wildlife. With many more injured and in emergency shelter. Hundreds of homes and other property has been destroyed. Fires are also burning in other states.

EPA has an air quality montoring station in Callan Park and Ports has one at the White Bay Cruise terminal.Westconnex is also required to monitor and report on air quality.

A health warning has been issued for Sydney air quality for Tue 26 November 2019 which is forecast to be POOR due to PARTICLES HEALTH MESSAGE: Unhealthy for sensitive people, and could cause symptoms, especially in people with heart or lung disease.

Inner West Residents have purchased their own air quality monitors and the data is available on a German Website. The website uses the American Air Quality Index which is different to the NSW health department’s guidelines. 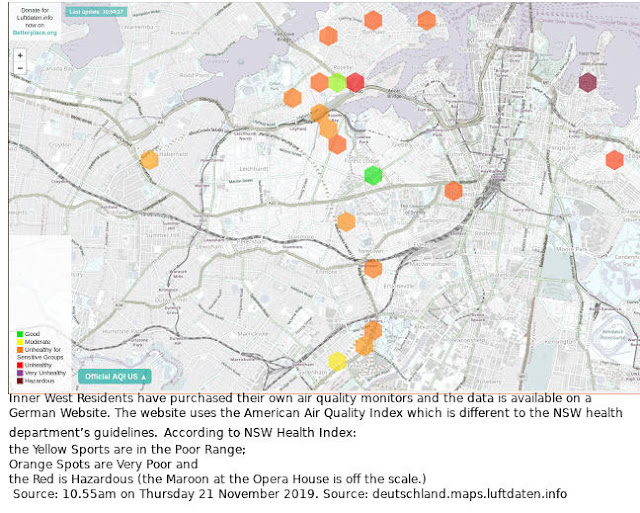 SMH November 19, 2019: "Paramedics have treated more than 50 people for asthma and breathing-related incidents since 6am as health authorities are warning residents of serious health risks resulting from thick bushfire smoke on Tuesday." https://www.smh.com.au/…/sydney-blanketed-in-dense-bushfire…

The Public Service Association says hazard reduction targets haven’t been met because of the severe cuts to staffing levels. Since 2011, the department’s 289 rangers, including 28 senior rangers, had been trimmed to 193. In 2017, the NPWS’s number of area managers were cut from 50 to 37 and there have the National Parks service is absorbing part of the $80m cut to the department of environment (within the super ministry of planning and industry) – Danger of cutbacks to rangers burns NSW Deputy Premier John Barilaro, The Australian 10:08AM November 13, 2019 https://www.theaustralian.com.au/…/546160173b4418e19b5caaf4…

SMH, November 15, 2019: NPWS lost many experienced firefighters and planners in recent years, those remaining were often tied up in training newcomers. https://www.smh.com.au/…/misleading-government-accused-of-h…

Sources of Air Pollution (ANSTO): " This demonstration project has found that up to half of the total sulfate air pollution in the greater Sydney region can be attributed to emissions from NSW’s eight coal-fired power stations. Despite being located many kilometres outside of the greater Sydney metropolitan area, these coal-fired power stations have a significant impact on air quality in the CBD areas of Sydney." https://www.ansto.gov.au/…/revealing-sources-of-sydney%E2%8…

RMS: "Diesel vehicles produce up to 80 per cent of 'total suspended particulates' emissions from motor vehicles in Sydney, even though they account for only 15 per cent of vehicle kilometres travelled." - https://www.rms.nsw.gov.au/…/vehicle-…/diesel-emissions.html

CLEAN AIR FOR NSW (2016): "Around 12% of all new heavy vehicles registered in NSW in the first quarter of 2016 were registered to government and a greater proportion of the NSW heavy vehicle fleet is either engaged on government projects or owned by private companies that want government work.
Vehicles are a major source of air pollution in major urban areas, with 62% of NO x , 24% of VOCs and 14% of fine particle pollution (PM 2.5 ) in Sydney coming from vehicles. NO x and VOCs are precursors to ozone formation and photochemical smog.

According to the Adapt NSW Website, the effects of climate change will include: 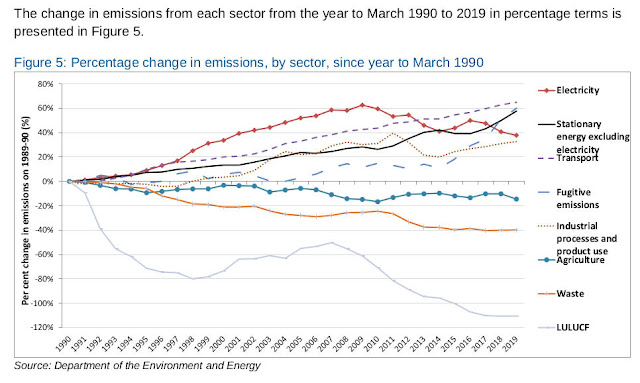 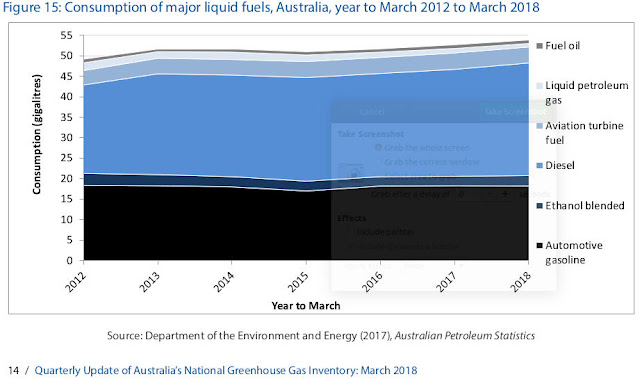