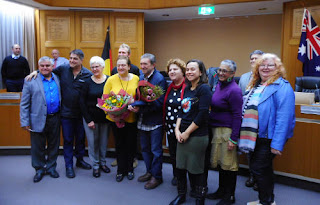 A very special part of last night's council meeting was for Inner West Council to recognise Mary and Frank Bonfante for their contribution to the economic and cultural life of Haberfield and beyond over 45 years.

Sharon Laura came to speak on behalf of the community in support of Clr Lucille McKenna's Notice of Motion.
Councillor Rochelle Porteous - Inner West Council thanked the Bonfantes in Italian. Clr Vittorio Macri empathasised on the trials and tribulations of family businesses.

Special dispensation was sought to make the presentation and take photographs in the Council Chamber. The motion was passed unanimously.

1. Council acknowledge Frank and Mary Bonfante and family for their contribution to the community of Haberfield through their long standing family business, Franks Fruit Market, Haberfield.

2. The Mayor write a letter to Mary and Frank Bonfante thanking them for their contribution and wishing them a long, happy and healthy retirement.

The character of Haberfield has been shaped by many people who live, work and visit the suburb. As owners of Franks Fruit Market, Mary and Frank Bonfante have positively contributed to the economic and cultural life of Haberfield for 45 years (01/02/1974). It is fitting that this be recognised, upon their recent retirement from their business in the Village.

Frank was born in Lipari, Aeolian Islands, Italy. He came to Australia in 1964, age 13, with his parents. He went to De La Salle Ashfield & then began working in the green-grocer trade. He was asked to run a shop, which was not doing well, in Haberfield 45 years ago. Within one year, he had turned the business around and eventually took it over. The shop was initially where Mario’s Liquor store is now located, on the opposite side of Ramsay St. Franks fruit shop moved to its present site. 44 years ago.

His father Gaetano worked in a factory in Concord. Mary, his wife would pick up her father-in--law after work, when she was picking up the children from school. Mary would then drop Gaetano (senior) back to the fruit shop, and he would help Frank close up each day. After he retired, Gaetano (senior) worked in Frank’s Fruit market for many years.

Mary was born in Innisfail, Far North Queensland where her family worked in sugar & tobacco farming. Her mother was from Catania & her father was from Treviso, Northern Italy. When Mary was 9, the family moved to Sydney and lived in Hawthorne Parade, Haberfield. Mary’s father worked in the concrete industry and her mother owned a dress shop with garment factory out back, in Haberfield, on the site of the current Barber (Pasquale). She could see Frank working from across the road, -and from across Ramsay St, their life long relationship began.

Mary and Frank married 40 years ago & have 3 children Gaetano, Jessica & Cristina. They have two grandchildren Jonathon & Alexia. All three children have worked in the shop, and are as well known to the local community.
Niemi Ajaka, known as Jack, worked with Frank & Mary for 22 years & retired just a few weeks ago. He was a valued member of the Frank and Mary’s ‘fruit-shop family’ and the Haberfield community.

One local resident who was a frequent visitor to the fruit market Jozefa Sobski provided the following
“Frank could always fill you in on the latest good and bad news about his produce. He would offer you a recipe to try and invariably its taste would be glorious and your meal enhanced. But, tomatoes were his specialty and all kinds could be purchased long before they became part of the supermarket staple. Quietly spoken, modest and self-effacing, he represented the qualities you admire in a small business owner. The small shop was always crammed full of delights picked up from the markets. He worked hard and long hours and in partnership with Mary, they kept the Fruit Market open through illness and accident. He was courteous to a fault, never allowing you to walk away in ignorance of what you could do with artichokes or how you could roast chestnuts. He always tried to please, but also encouraged you to experiment. His contribution to building the suburb’s profile and attracting customers from elsewhere can be measured in good-will and broadening its cultural and customer base. He was on the path for the Haberfield Food Tours which were run at weekends and you could enjoy him holding forth with Eastern Suburbs visitors on the relative flavour merits of tomato varieties matched by recommended cooking methods.”

Hopefully in retirement Frank may return to Italy, his birthplace, which he has not visited since coming to Australia.

Frank and Mary and the family will be missed by Haberfield residents and the many others who came to know and respect them over the years.
Clr Marghanita da Cruz Haberfield Heritage History