That the National General Assembly calls on the Federal Government to:

1. review the national limit for PM 2.5 in light of the fact that recent scientific evidence finds there is no safe level of PM 2.5.

3. release all reports, submissions and analysis including health studies on all major infrastructure projects in the future and to all current projects under construction.

The national limit for air pollution PM 2.5 is 8. Scientific research however, finds that there is no safe level of PM 2.5, which is linked to heart disease, cancer, premature birth and can impact lung and brain development. There is also evidence that it may be linked to diabetes, depression in adolescents and dementia. On projects such as the WestConnex toll road project in Sydney levels well above the national level are regularly being recorded. 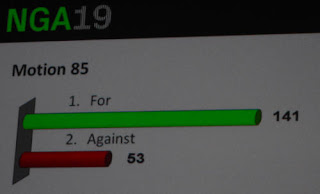 That the National General Assembly calls on the Federal Government to:

1) Establish a Royal Commission into the gambling industry and the $24 billion in annual gambling losses nationally, the highest in the world in per capita terms; and

a. Embrace national harm minimisation policies to reduce gambling harm in Australia such as:
b. Following the lead of the UK Labour Party in supporting a ban on credit card usage with Australian licensed online gambling companies;

While regulation of venues is largely a matter for State Governments, given impacts nationally, it is sought that the Federal Government use powers at its disposal to identify and assist in harm minimisation.

Rather than being seen solely as a legitimate recreational activity, elements of the gambling industry are increasingly being shown to be predatory, deliberately misleading users and preying on the vulnerable. Gambling is identified in research to cause harm linked to adverse mental health, family violence, poverty, homelessness and suicide. Negative health and other impacts and costs are as high as from diabetes, bipolar disorders and drug dependence.
ALGA2019 Clr Marghanita da Cruz