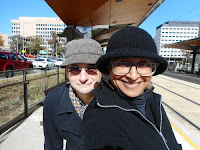 The first stage of the Light Rail has opened in Canberra.

While the new service is being bedded in, Trips are free but passengers need to use ACT MyWay Public Transport Card and tap on and off. 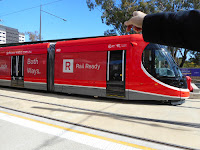 Unlike the Inner West light Rail in Sydney the tracks are bedded in concrete instead of blue metal. Interaction between pedestrians and cyclists and the Light Rail is a new experience for Canberrans.

The free trips are popular with Canberrans lining up and squeezing onto the trams.

Stage 2 of the Light Rail is part of a Greens-Labour Parliamentary Agreement when the ACT government was formed in 2016.

The light rail runs between Civic and Gunghalin. 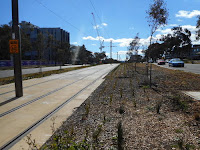 More like a train than a tram the line is in the middle of the large arterial roads which connect Civic to Canberra.

Housing density is being significantly increased in the corridor.

It is likely that as in Sydney's Inner West Light Rail demand will grow more rapidly than predicted. But this would be a good direction for a city dependent on the private car.

About a month ago the Aviation Authority gave approval for Wing (a google subsidiary) to trial a drone service.

The drone added to the tech tourist experience as we saw two flying over Franklin and two landing in Mitchell.
About a month ago: "Google's drone service made its first air delivery in North Canberra earlier this week after getting approval from the country's civil aviation authority." - https://www.crn.com.au/news/googles-drone-delivery-service-takes-off-in-canberra-523631

Underground power and other cabling and minimal tree cover around Gunghalin would make the Drone Pilot's job easier.