3. Note that no liability has been incurred to Council at all through the previous adoption of the DCP and that the previous assessment of the potential cost of public domain works associated with the rezoning have now been revised down by approximately $35 million; and

4. Call on Councillors who following the adoption of the DCP have made potentially defamatory statements and imputations about other Councillors or who through those comments may have brought the Council into disrepute to withdraw those comments and apologise.

This is the item on the Council Papers:

Precinct 47 (P47) is located along Victoria Road at Marrickville and bounded by Sydenham Road to the south and Addison and Edinburgh Roads to the north. The Precinct was rezoned by the NSW Government in December 2017, to permit new multi-unit residential, mixed use and business development uses, significantly increasing development potential within the Precinct. A DCP to manage development within the Precinct was adopted by Council in July 2018. To deal with the identified most critical local infrastructure needs, namely stormwater mitigation and transport needs, consultants were commissioned to inform the development of a local contributions plan for the Precinct.

A contributions plan has subsequently been prepared, as an addendum to the existing Marrickville Section 94/94A Contributions Plan 2014, which includes transport improvements (located on public land) valued at about $0.6m and stormwater improvements valued at about $15m. Although monies will be collected first for these critical infrastructure items, the precinct will also continue to meet existing contribution requirements for recreation and community facilities within the Marrickville Contributions Plan 2014. Given that the critical infrastructure requirements for the Precinct can be met within the existing “cap” it is not proposed to recommend a review of the cap in this instance.

As not all of the required traffic and transport improvements for the Precinct are to be addressed in the contributions plan, amendments have been necessary to the adopted DCP to ensure the orderly delivery of this additional transport infrastructure, and for the delivery of that part of the required water infrastructure works that occurs on private land. Amalgamation plans are recommended to be included within the DCP to help ensure the delivery of this additional infrastructure. Other recommended changes to the adopted DCP for the Precinct relate to addressing some of the matters raised at the time of the adoption of the DCP which arose from the public exhibition of the DCP.

Supporting information on the consideration of the draft plans forms Attachment 1. It is recommended that the draft Contributions Plan and amended draft Development Control Plan be placed on exhibition for a minimum of 28 days in accordance with the Act.

1.    Council notes the upzoning has resulted in a potential additional 1,100 dwellings in the precinct, Council engages a consultant for a maximum of $15,000 to prepare an affordable housing contribution scheme for the precinct in accordance with Council's Affordable Housing Policy and Council's inclusion in SEPP 70 in February 2018, with progress to be reported back to Council by October;

3.    Council immediately write to the DPE to indicate Council’s intention to prepare an affordable housing contribution scheme as a feasibility study to support the Victoria Rd precinct's inclusion under the SEPP 70 scheme; and

4.    The funds required for the consultant be identified by officers by reprioritisation of other works.

1.    Updates the draft Victoria Road Development Control Plan in accordance with the  recommendations listed in Tables 1 - 3 (Attachment 1) of this report;

2.    Continues to prepare a Section 7.11 Contributions Plan to support infrastructure upgrades in the precinct; and

3.    Requests a report be made to a future meeting of Council on progress on items 1 and 2 above at such time as the likely scope and cost of infrastructure needs for the precinct have been identified.

10.03pm - The Mayor, Clr Byrne adjourned the meeting for a short recess.


The Victoria Road Planning Proposal was approved by the gazettal of an amendment to the Marrickville Local Environmental 2011 Plan (MLEP 2011) on 1 December 2017 (refer to Attachment 3 for the gazettal determination letter). The Victoria Road Planning Proposal re-zoned areas of IN1 General Industrial land to R3- Medium Density, R4 – High Density, B4 – Mixed Use and B5 – Business Development zones. These zones enable a range of built forms including residential flat buildings, commercial retail/office premises and mixed residential/commercial uses, enabling a potential increase of 1,100 dwellings in the precinct. 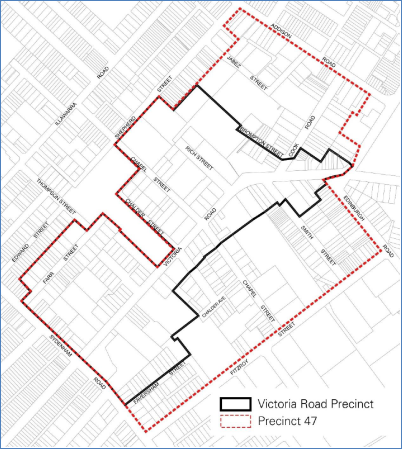 
New Clause 6.17 was inserted into the MLEP which requires the preparation of a Development Control Plan (DCP) for the land prior to any development consent being granted addressing the following matters:


“(a)  the upgrading of road networks and intersections on the land and surrounding areas,


(b)  transport connections on the land and within surrounding areas (including the layout of laneways, bicycle routes and other connections),


(c)  the protection of items and areas of heritage significance,


(d)  the management and mitigation of the impact of existing industrial development in the surrounding areas on the amenity of proposed residential development on the land,


(e)  the impacts of the development on the surrounding residential and industrial areas and the amenity of the neighbourhood,


(f)  the mitigation of aircraft noise (including through building design and the use of appropriate building materials),


(g)  the management of drainage and flood risks,


(h)  a network of active and passive recreation areas,


(i)  the protection of public open spaces (including from overshadowing).


Clause 6.18 was also inserted which requires satisfactory arrangements to be made with the State Government regarding public infrastructure, most specifically some widening at the intersection of Victoria and Sydenham Roads.


The current zoning map of the MLEP 2011 for the precinct is below. 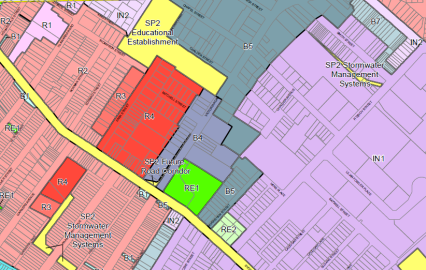