The "Snap Action" was to raise money for the family of David Dungay who died in custody at Long Bay Prison at Malabar in Sydney.

The NSW Coroners investigation into Dungay's death was adjourned last July and will resume on Wednesday 6 March 2018.

"Mr Dungay was just weeks away from release, when he died during a cell transfer at Long Bay jail hospital in December 2015.
He was held down by five prison officers after he was told to stop eating a packet of biscuits.
The court was played footage showing Mr Dungay transferred to the second cell while handcuffed and then injected with the sedative midazolam. Mr Dungay said 12 times that he couldn’t breathe." -  Family 'devastated’ as Coroner delays Dungay death in custody inquest, NITV, 27 Jul 2018 - 6:13pm

Leetona Dungay is asking for the wider community's presence at the NSW Coroner's Court when the inquiry resumes on March 6. 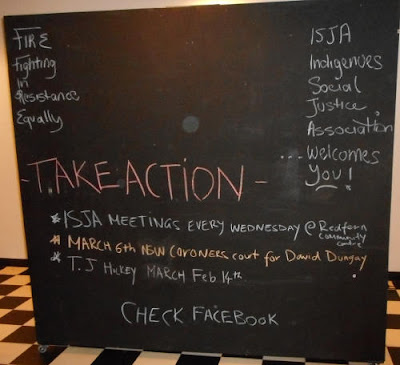 "This inquest has therefore focussed primarily on the manner of death of T. J. Hickey. In fact I am able to find, at the outset, to the effect that Thomas James Hickey died at 1.20 am on 15th February 2004 at Sydney Childrens’ Hospital Randwick, of penetrating injury of neck and chest sustained on the morning of 14th February 2004 when he fell from his bicycle and was impaled upon a steel fence at the rear of 1 Phillip Street Waterloo. The injury was probably non-survivable.


In terms of manner of death I must also come to a conclusion as to whether or not this is, after all, a Section 13A (Section 13A(1)(b): as a result of or during police operations) death. For if it is so assessed, then not only is this a mandatory inquest but in due course a synopsis of the case must find its way into the 2004 Annual Report of the State Coroner to the NSW Parliament. It also follows that if the death is assessed as being as a result of or during police operations, the role, if any, of police in the death ought to be explained.

I am in fact satisfied that, though technical, this death is a death during police operations within the meaning of Section 13A, Coroners Act 1980." - 287/04 Aboriginal male aged 17 died on 15 February 2004 at Randwick. Finding handed down on 17 August 2004 at Glebe by John Abernethy, NSW State Coroner,
Report by the NSW State Coroner into deaths in custody/police operations, 2004

1. "Proportionally, we are the most incarcerated people on the planet. We are not an innately criminal people. Our children are aliened from their families at unprecedented rates. This cannot be because we have no love for them." - Uluru Statement from the Heart, 2017

2.Complex factors lead to women and girls' entering and returning to prison. Criminalisation is usually the outcome of repeated and intergenerational experiences of violence, poverty, homelessness, child removal and unemployment, resulting in complex health issues and substance use. First Nations women and girls are massively over-represented in prison due to the racism at the foundation of systems of social control...Sisters Inside

3. Four Indigenous creatives and academics, Professor Larissa Behrendt, Assoc Professor Pauline Clague, Dr Lou Bennett, and Dr Romaine Moreton, have worked with community to re-voice the stories of Aboriginal women who have died in custody....- Sorry for Your Loss Project (2018)